Last 2 Ayat of Surah Baqarah – The Importance and Meaning 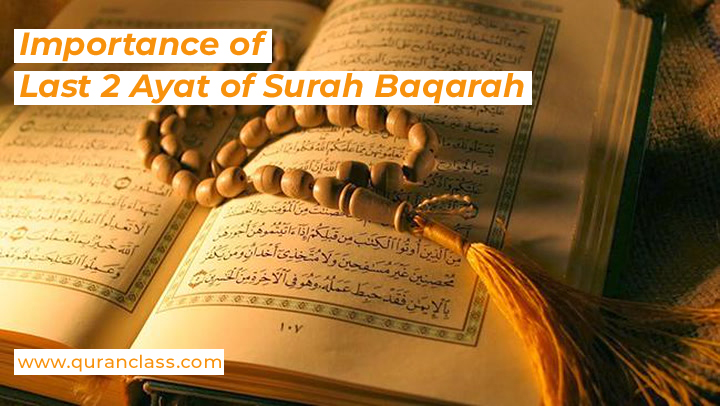 The Last 2 Ayat of Surah Baqarah is a reminder for us to stay on the straight path and to not be led astray by those who call us to follow them instead of Allah. They remind us that Allah is the only One who can lead us to the truth, and we should not believe in anybody else.

Surah Baqarah is the second and longest chapter of the Quran. It was revealed in Madinah and has 286 verses. The name al-Baqarah has been derived from the story of the cow mentioned in verses 67-73. This Surah has been so named because of the first part’s subject matter, which deals with the prohibition of killing cows.

In this Surah, Allah has elaborated on Islamic belief concepts and set the basis for the Islamic way of life. The first part teaches us the basic beliefs of Islam, such as the Oneness of Allah, the Prophethood of Muhammad (SAW) and the Day of Judgment. The second part teaches us the practical aspects of Islam, such as prayer, fasting, and charity. The last part of this Ayat tells the story of the Israelites and their prophets.

What Makes Surah Baqarah so Special?

There are several reasons why Surah Baqarah is so special:

It is the longest Surah in the Quran and therefore contains much guidance.

It was revealed in Medina, which was the Prophet Muhammad’s (SAW) home city, and it contains many verses that relate to the Prophet’s life and teachings.

Surah Baqarah is considered one of the most important chapters in the Quran because it contains guidance on a variety of topics, including faith, morals, and social interactions.

The Central Message of Surah al-Baqarah

The central message of Surah al-Baqarah is in verses 163-164:

“And your god is one god. There is no god but him, Most Gracious, Most Merciful. In the creation of the heavens and the earth, in the alternation of the night and the day, in the ships that speed through the sea with what is useful to man, in the rain that Allah sends down from the sky and quickens the earth after it has died, in the beasts of all kinds that He scatters through it, in the change of the winds, and in the clouds that are driven between the heaven and the earth, (are signs) for those who understand.”

The Last 2 Ayats of Surah Baqarah

“Whoever recites the last two verses of Surah Al-Baqarah at night that will be sufficient for him” [Sunan Ibn Maaja].

“Allah wrote a book two thousand years before He created the heavens and the Earth, and in it are the last two verses of Soorat Al-Baqarah. The devil will not come near a house in which they are recited for three nights.” [Sunan At-Tirmithi and Musnad Ahmad]

“I was given these last verses of Soorat Al-Baqarah from a treasure under the Throne. None before me has been given them, and none after me will be given them.” [An-Nasaai]

The Significance of the Last Ayat of Surah Baqarah

In Surah Baqarah last 2 ayat, Allah (SWT) commands the believers to turn to them in Tauba (repentance) and seek His forgiveness. He promises to forgive those who repent and turn to Him with sincerity. These Surah Baqara last ayat are a powerful reminder of the importance of repentance and the mercy of Allah (SWT).

The first verse (255) starts with the statement, “Allah – there is no deity except Him.” This is a powerful affirmation of Tauhid (the belief in the Oneness of Allah). It is also a reminder that Allah (SWT) is the only One worthy of our worship and obedience. This verse is a potent reminder of the need to turn to Allah (SWT) in repentance and seek His forgiveness.

The reciting Surah Baqara last 2 ayat benefits are wide and they are a powerful reminder of the importance of being grateful to Allah for His countless blessings. They also emphasize the need to stay away from all forms of evil and wickedness. These verses also sternly warn those who disbelieve in Allah (SWT) and His Messenger (SAW). Not only is that, these ayaat a complete set of Dua and Astaghfaar

NextThe Importance and Benefits of 4 Qul in IslamNext