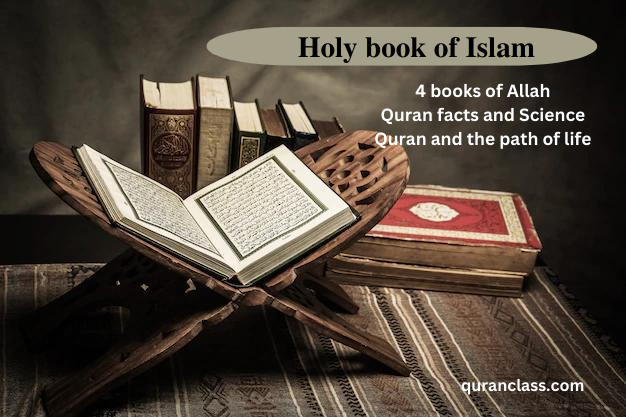 Islam, which means “submission to God’s will,” is an Abrahamic religion. “There is no God but Allah, and Muhammad is the messenger of Allah,” is the central tenet of Islam. Muslims are those who adhere to Islam. Muslims have a whole way of life because of Islam, which is a complete religion. A Muslim must thus accept the validity of all of the books of Allah. In Surah Al-Baqarah, Allah asserts that those who have a deep belief in the Hereafter, holy book of Islam Quran, and earlier revelations are those who are genuinely led.

Every holy book contains the revealed, uncreated word of Allah. Regarding its acceptance of Allah’s revelations, Islam is superior to the two Abrahamic faiths (Judaism and Christianity). Surah Al Hadid of the Quran confirms that Allah sent His messengers divine literature to teach people of the book Quran. Quran, the holy book of Islam, contains revelations that Allah gave to the Prophet Muhammad.

The seventh century CE saw the creation of the Quran during a 23-year period. Muhammad delivered all of the revelations during sermons and gatherings, and scribes subsequently wrote them all down. Hazrat Abu Bakr, the first caliph of Islam, ordered the compilation of the verses and chapters into a book, which has been the Muslim holy book ever since.

What is the holy book of Islam called?

The holy book of Islam is called, Quran.

How many holy books are there in Islam?

There are 4 books of Allah in Islam, which were revealed in different eras on different Prophets:

Tawrat revealed on Prophet Musa (AS)

Zabur revealed on Prophet Dawud (AS)

As Muslims, we firmly believe that divine holy books based on several Prophets were sent by Allah Almighty for the benefit of mankind. To disseminate His word across the world, Allah (SWT) gave His messengers the holy books of Islam. Most of Allah’s revelations have either been lost or have undergone some sort of alteration. They have been combined with mythology, traditions, and individual aspirations to produce something that is substantially dissimilar to what Allah (SWT) first revealed. Since the Holy Quran has survived in its original form and will do so until the Day of Judgment, it is the only book that can be believed. The following is a discussion of the four revealed Islamic sacred books:

This is the message that Prophet Musa received from Almighty Allah (AS). The “Law” in the Quran—more specifically, the Law of Moses—is referred to in the sacred book Tawrat. The Torah of the Jewish faith and the Old Testament of the Christian faith is usually linked with the Tawrat. This sacred book’s original text has, sadly, been lost. According to the holy Qur’an, Tawrat is described as follows:

“Verily, We did send down the Torah [to Musa], therein was guidance and light, by which the Prophets, who submitted themselves to Allah’s Will, judged the Jews. And the rabbis and the priests [too judged the Jews by the Torah after those Prophets] for to them was entrusted the protection of books of allah, and they were witnesses thereto. Therefore, fear not men but fear Me (O Jews) and sell not My Verses for a miserable price. And whosoever does not judge by what Allah has revealed, such are the disbelievers.”

The Zabur is the name of the holy book that was revealed to Prophet Dawud (AS). The Arabic term for “songs” is zabur, and it refers to the sequence of songs or chants that the Prophet Dawud (AS) received as this revelation. Like Tawrat, this holy book’s original text is no longer with us. In the Holy Quran, Allah the Almighty declares:

The Injeel, which Prophet Eesa received from Allah Almighty, is the holy book (Jesus, AS). Many people make the error of saying that the Injeel is the New Testament of the Bible, much as they did with the Tawrat, even though the title Injeel means “Gospel Book” or “The Gospel.” But that is not the case. Like many other Books of Allah (SWT), Injeel’s original text is no longer accessible. Muslims are so forbidden from reading the modified holy books. The Holy Quran books contain the message of the Injeel.

The Holy Quran is the fourth and last book.  Quran is islamic holy book. Of the three holy books—Torat, Zabur, and the Bible—this is the most revered. Additional minor Sahifas, in addition to these four Holy Books, were revealed to other prophets. After being recognized as a prophet for 23 years, the Prophet Muhammad received the Holy Quran as a revelation when he was 40 years old. Between the years 610 and 632, the angel Gabriel revealed it to the Prophet Muhammad in the West Arabian cities of Mecca and Medina.

The Noble Quran is the sole book of Allah that is still in its original form. The promise made by Allah Almighty that His word would be honoured eternally was still true 1400 years after the Holy Quran was revealed. The Quran is being studied in the same form as it was over a thousand years ago. Quran is always accessible in a single, consistent edition since it was written in Arabic. The Holy Quran, which is Allah’s (SWT) supreme book, contains the central message of all four of Allah’s writings. The names Allah bestowed to the Holy Quran include Kitab, Al-furqan, Kalam, Zikar, Huda, Shifa, and others.

How many chapters are there in Quran?

The Quran contains 114 chapters in all. Ayahs, or verses, make up the chapters, and each one has a distinct importance and meaning. The chapters were revealed in compliance with various guidelines and goals.

The narrative of creation is referenced in the Quran.

“Allah created heavens and earth and all that is between them in six days.”

For life to begin on Earth, He made Adam and Eve. Islam’s first Prophet named, Adam.

Islam’s Claims Regarding the Quran

With the exception of the opening surah and a petition to Allah, all surahs are addressed to Allah. Angel Jabril gave the Holy Prophet the complete Quran as a revelation. The only unique revelation from Allah is the Qur’an.

In Quran, it is mentioned, “And this Quran is not such as could be forged by those besides Allah, but it is a verification of that which is before it and a clear explanation of the book”

How the Quran provides a path to life

The Quran provides us with a comprehensive code of conduct and tackles every problem Muslims will ever encounter until the day of judgment. We receive entire instruction from the Quran, which teaches us how to live, act, love, donate to charity, be humble, pray, and observe fasts. Quran gives us duas for every situation, such as dua for eating and sleeping, dua for traveling, dua for forgiveness, etc.

The Quran also made reference to maintaining peace and averting bloodshed. Holy Quran states that “As for those who divide their religion and break up into sects, you have no part of them in the least. Their affair is with Allah; He will, in the end, tell them the truth of all that they did.”

What the Quran Has to Say About Facts and Science

Islam does not see any contradiction between current scientific understanding and religious belief. In fact, during the Middle Ages, Muslims dominated the fields of science and exploration for a significant amount of time. The Quran itself, which was revealed fourteen centuries ago, contains a great deal of scientific information and imagery.

The entirety of the cosmos, which Allah created, abides by and abides by His laws. Muslims are urged to educate themselves, discover the cosmos, and look for “Signs of Allah” around the world. Allah claims:

“Behold! In the creation of the heavens and the earth; in the alternation of the night and the day; in the sailing of ships through the ocean, for the profit of mankind; in the rain which Allah sends down from the skies, and the life which He gives therewith to an earth that is dead; in the beasts of all kinds that He scatters through the earth; in the change of the winds, and the clouds which they trail like their slaves between the sky and the earth; here indeed are Signs for a people that are wise”

“It is He Who created the night and the day, and the sun and the moon. All (the celestial bodies) swim along, each in its rounded course”

“It is not permitted for the sun to catch up to the moon, nor can the night outstrip the day. Each just swims along in its own orbit”

“He created the heavens and the earth in true proportions. He makes the night overlap the day, and the day overlaps the night. He has subjected the sun and the moon to His law; each one follows a course for a time appointed…”

“The sun and the moon follow courses exactly computed”

“You see the mountains and think they are firmly fixed. But they pass away just as the clouds pass away. Such is the artistry of Allah, Who disposes of all things in perfect order”

“Man, We did create from a quintessence of clay. Then we placed him as a drop of sperm in a place of rest, firmly fixed. Then We made the sperm into a clot of congealed blood. Then out of that clot, We made a fetus lump. Then We made out of that lump bones and clothed the bones with flesh. Then We developed out of it another creature. So blessed be Allah, the Best to create!” (23:12-14).

Quran and the role it plays in a Muslim’s life

Because God revealed the Quran to the last Prophet Muhammad (peace be upon him) through the angel Gabriel, Muslims believe it to be significant. The Quran is Divine instruction for humanity and is the divine word. Muslims think that because the Quran is Allah’s message, it has enormous power and influence. The guidelines it puts down are the ways to win Allah’s favor and heaven. The Majestic Quran has the following seven unique qualities and advantages that make it a unique and significant book:

The three divinely revealed texts that came before the Quran also had other components like creation myths and prophecies. Additionally, they issued judicial decisions that outlined what was and was not allowed. People of many times and places might access these texts. The rational parts that agree with the Quran may still be true, but they have become corrupted with time. However, because the Quran is addressed to the whole human species, it trumps all previous revelations. As a result, it has legal implications for individuals of all races and tribes. Islam’s holy four sacred books help us understand Allah’s Mercy since He sent messengers to bring messages of truth to the diverse human populations on Earth, giving them every chance to accept the truth.